Measuring land degradation needs to be done from the ground up

Measuring land degradation needs to be done from the ground up

Bush encroachment is a matter of growing concern in the semi-arid regions of Namibia. Locally adapted, long-term solutions for land restoration must be elaborated. It is crucial that local scientists are empowered to map and monitor the degradation process themselves, our authors maintain.

The Herero people of Namibia are resilient. After migrating from the Great Lakes of East Africa as herdsmen, they faced invasion by armed migrants and survived bitter warfare throughout the 19th century. But today, in the remote, semi-arid Otjozondjupa Region, where they have their communal home, the Herero people face another threat – felt this time under their feet. The grassland their animals rely on is being replaced with dense, thorny bushes, a process called “bush encroachment”.

Commercial livestock farmers in the country face the same threat. The beef industry is a major economic sector in Namibia accounting for 68.4 million US dollars of the country’s export revenue annually. But bush encroachment is causing revenues to drop. This form of land degradation is now recognised as the fourth sub-national indicator in Namibia under the UN Convention to Combat Desertification (UNCCD) process of Land Degradation Neutrality, which is setting a process in motion to map, restore and monitor degraded land on a global scale.

Our research shows rapid encroachment of high and low density bushes creeping into grassland areas (see Figure below). This has important consequences for the land degradation process for a number of reasons. As an example, our preliminary findings show that significant amounts of carbon stored in the soil are lost after grasslands have been converted to bushland. It takes decades before bushes can sequester – or store – more carbon in the soil again. In addition, bush encroachment is thirsty: the bushland roots reach much deeper into the soil than grasslands, sucking up valuable water resources, which in turn makes less water available for grasses and changes the local ecology.

While bushes are a natural feature of Otjozondjupa Region, it is not clear what is causing the rapid increase in bush density, and as yet, no cost-effective method has been identified to stop the encroachment. Some evidence suggests that livestock herding may itself be a driver, since bushes may be replacing grasses that have been overgrazed. Some entrepreneurs are trying to turn the problem into an opportunity by producing charcoal for the European market. What is certain is that local solutions for people like the Herero and other marginalised groups will need locally relevant solutions on the ground. 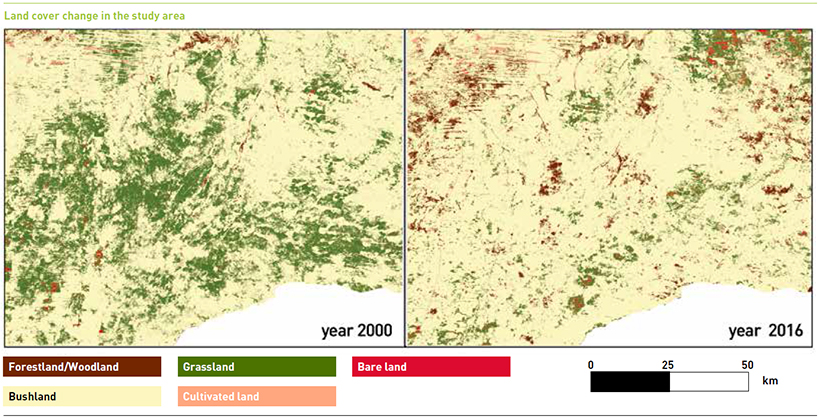 Building capacity on the ground

In 2016, we embarked on assessing the extent of land degradation in Otjzondzupa Region in Namibia, and partnered with a team from the country’s Ministry of Environment and Tourism (MET) – some of whom represent the government at the UNCCD – to establish a baseline to measure Soil Organic Carbon (SOC) and Bush Encroachment (BE). In order to develop the baselines to track encroachment, we first worked out baselines to track Land Use and Cover Change (LUCC) and Net Primary Productivity (NPP), which helps us distinguish bushes from grasses remotely. This was done by analysing different climatic, vegetative and topographic variables and data – which had not been carried out at such a scale and resolution before. Critically, all four of these variables are also the main indicators used by the government to report progress on Land Degradation Neutrality to the UNCCD.

While the CIAT team is based in Nairobi, Kenya, and our collaborators, World Soil Information (International Soil Reference and Information Centre – ISRIC) operating from Wageningen University in the Netherlands, we knew from the start that the success of land restoration efforts would depend on empowering local scientists to map and monitor the degradation and restoration processes and, more importantly, that methodologies needed to be adapted locally. Namibia’s model of Integrated Regional Land Use Planning (IRLUP) is based on stakeholder engagement with local communities. It is up to these communities to do the actual land restoration. If the activities involved are not accepted by the communities, they will likely fail. So it is important for them to be locally relevant and context-specific. Twenty land resources management professionals were trained in remote sensing, geographic information systems (GIS) and digital soil mapping (DSM) technologies using open source software; this enables participants to reproduce LDN baselines without additional software costs in the future.

As part of a series of trainings, teams from different ministries and universities now lead the effort in collecting soil samples, identifying plant species, and digital soil mapping. We are now in the final stages of validating the LDN baseline results for a different region, Omusati. Enthusiasm for further collaboration is high, and applications of the newly acquired skills are limitless.

All regions are now required by law to complete IRLUP. As part of the process, important data, e.g. the land degradation baselines, are to be included in participatory meetings with local communities such as the Herero. Yet the biggest achievement of our work may still be to come. Once communities like the Herero can use locally produced maps to co-develop sustainable approaches for managing bush encroachment, increasing soil carbon, water resources and improving livelihoods, we expect to see ground-breaking, locally relevant solutions.

Namibia has established a national de-bushing programme which promotes the large-scale expansion of effective activities to fight bush encroachment. The programme is supported by public and private sector stakeholders. GIZ backs both this programme and IRLUP.

Towards Sustainable Charcoal Production through Certification

The Business Opportunity in Bush Biomass

The Return of Functioning Ecosystems Through Rewilding

Tweets by @dasnamibia
Menu
This website uses cookies to improve your experience. If you continue to use this site, you agree with it.
Ok